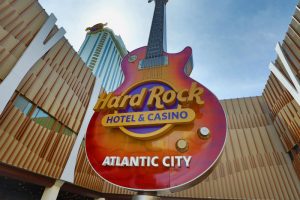 Hard Rock Hotel & Casino has become the latest Atlantic City resort to announce a multi-million renovation plan as the city looks to recover from the impact of the Covid-19 pandemic.

The property said Monday that it would invest at least $20 million in capital improvements, including suite renovations, additional gambling options, a new Starbucks, a dining outlet, and a refresh of existing beachfront amenities.

Hard Rock Atlantic City opened doors in June 2018 at the site of the former Trump Taj Mahal. Its parent company, Hard Rock International, purchased the shuttered, but once glitzy, property in the spring of 2017. The gaming and hospitality operator invested more than $500 million to bring down Trump Taj Mahal’s iconic minarets and other exterior decorations and create a rock ’n’ roll-inspired destination resort.

The majority of Hard Rock’s latest investment into its Atlantic City complex will go towards the renovation of 66 Celebrity and 25 Roxy suites. All suite renovations are being designed by Klai Juba Wald Architecture + Interiors, it became known.

In addition, all standard hotel rooms at the resort have already been upgraded with new flat screen TV monitors and LED lighting.

Hard Rock revealed that it would add more gaming positions in its casino’s Asian and High Limit areas. The main gaming floor and cage areas will also be expanded as part of the $20 million project. These will feature additional table games and slot machines.

A new Starbucks is set to open doors at the property late this month. It will offer Boardwalk access and will be located right next to the existing Hard Rock Cafe. The resort will also unveil a new dining outlet soon. That new facility is slated to open doors this summer.

Hard Rock is further set to upgrade its beachfront amenities to “reflect the hard work of the U.S. Army Corps of Engineers beach replenishment projects that took place this year.” The property said Monday that upgrades will be made to its Hard Rock Beach Bar, including the addition of new restrooms and more than 1,000 beach chairs.

The hotel and casino complex also said it has started implementing programming and sound enhancements to Hard Rock Live at Etess Arena and Sound Waves as headliner entertainment is about to return to Atlantic City.

The resort plans to also make improvements to its meeting and convention space as well as its indoor pool.