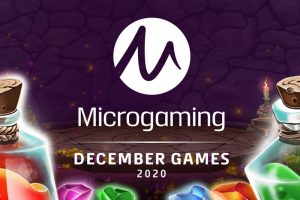 New poker experiences, jungle excitement, and adventures into the world of espionage – this is just a little bit of what Microgaming has in its December bag of gifts for fans of its online casino content.

And the first game listed in the company’s December line-up of new releases was launched on the first day of the month.

Alchemy Fortunes from All41 Studios invites players into the world of arcane arts, a place full of mystery. The game is a high-volatility grid slot that All41 Studios has generously packed with features like Rolling Reels, extra wilds, free spins, and Hyperclusters.

The game is set in a medieval alchemist’s lab. The grid features a plethora of mysterious minerals and unfamiliar potions. Mixing these might trigger a cascade of Hyperclusters that unlocks the Rolling Reels feature.

Rolling Reels remove the winning cluster to make room for new symbols to be dropped into the grid. The process repeats until there are no more winnings left to scoop.

Diamond King Jackpots and Other Exclusives

Next in line was Diamond King Jackpots which was released on December 3. The game was crafted as part of Microgaming’s exclusive supply deal with Las Vegas-based iGaming studio SpinPlay Games. The game offers action-packed safari experience with its jackpots, Power Range multiplier wilds, free spins, and 1,024 winways.

On December 8, Microgaming will roll out Assassin Moon, a new exclusive by Triple Edge Studios. In this new slot, players meet Luna, a woman of mystery and join her in her escapades in the world of espionage. Luna is an assassin who only strikes when the moon becomes neon pink. In such cases, player can score six or more Hyperhold symbols that land in both the base game and during free spins.

If players collect all 15 moons they are awarded the Mega jackpot of 5,000 times the bet. The WinBooster mechanic activates lock targets for big wins. In addition, players can win up to 10 free spins, with each spin landing a 3×3 full jumbo symbol. Stacked wilds may land on any of the reels for another wave or rewarding prizes.

Microgaming will debut the Silverback Multiplier Mountain slot from Just For The Win Studios on December 15. This high volatility slot is set against the backdrop of a tropical cloud forest where a shy but powerful silverback mountain gorilla accompanies players in an adventure of a lifetime.

Silverback symbols are the game’s only symbols that pay for two of a kind. Golden gorilla coins act as wilds and substitute for all symbols on the reels except the scatter. Mountain symbols serve as the game’s scatters and trigger the free spins feature. Here players climb the Multiplier Mountain where every win adds +1x to the multiplier and gives an extra spin. Stacked silverbacks award big payouts.

Microgaming’s highly anticipated new poker offering has almost arrived. The company will unveil its new Hold’em Poker product later this month. Hold’em Poker is a fast-paced €5 buy-in Sit & Go tournament that comes with a random prize pool wheel mechanic and a progressive jackpot that seeds at €25,000.

Hold’em Poker marks the newest poker chapter for Microgaming after the company shuttered its MPN poker network earlier this year. The new product is fully optimized for mobile and was designed to appeal to both poker and casino players. It boasts a realistic poker room design, while its rotating portrait and landscape modes truly make for a dynamic mobile experience.

The game is the first of several poker products Microgaming plans to release in future.