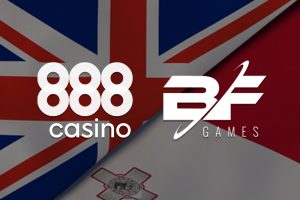 Online casino games maker BF Games has teamed up with 888casino to provide the popular iGaming brand with access to its most popular titles.

Under the terms of a recently penned deal between the above two, the studio has launched its best-performing online slots with the operator in the UK as well as in other territories the latter provides its services in via its licenses from Malta and Gibraltar regulators.

888casino players in a number of markets can now play five of BF Games’ most popular games, with those being Book of Gates, Book of Ming, Royal Crown, Stunning Hot, and Stunning Hot 20 Deluxe.

Formed as part of online gambling company LV Group, BF Games develops and supplies online gaming content to a number of operators across a growing array of markets. In its early days, the studio has been focused on cementing itself in Central and Eastern European markets, but has in recent years moved to expand in other territories.

The recent partnership with 888 Holdings and its iGaming brand 888casino marked an important step in the content maker’s expansion strategy and provided it with wider presence in existing markets and access to new ones, as well.

The 888casino alliance came on the heels of a similar partnership with rival operator BetVictor, which was announced last month.

Of their partnership with the popular casino brand, BF Games Head of Business Development Claudia Melcaru said that teaming up with one of the leading iGaming businesses was a great achievement for the studio and a “testament to the performance of our games.”

She went on to say that 888’s global presence will be a huge advantage to them as they continue to grow their footprint across different markets.

888 VP of B2C Talya Benyamini said that they are focused on providing their players with a wide and diverse portfolio of entertaining iGaming content and that as they have added BF Games’ titles and made them available to their UK, Malta, and Gibraltar audiences, their players can now enjoy an increased variety.

This is the latest of a series of content deals inked by the gambling operator in recent days. Last week, it unveiled a partnership with Swedish online casino games maker ELK Studios. Under that recent deal that strengthened an exciting relationship between 888 and the studio, the latter would supply its entire portfolio to the operator’s Italian site. This will mark ELK’s entry into Italy’s lucrative digital gambling market, one of Europe’s largest.