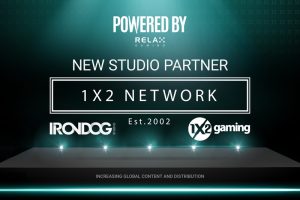 Online gaming content supplier and aggregator Relax Gaming has added a new partner to its Powered By Relax program for commercially independent casino games makers as the latest milestone in a continued growth for the company.

Relax has teamed up with 1X2 Network in a deal that will provide the former’s ever-growing distribution network with access to the latter’s games portfolio.

The agreement also includes access to content from 1X2 Network’s new iGaming developer, Iron Dog Studio. The recently formed but already widely popular studio is behind creative, innovative, and top-performing online slots such as Rainbow Wilds and 1 Million Megaways BC.

As part of the partnership between Relax and 1X2 Network, Relax’s clients will be able to offer their players their own version of Branded Megaways, which recently scooped the Game of the Year title at the EGR Operator Awards.

Formed in 2002, 1X2 Network crafts HTML5 gaming content and offers it through its 1X2 Gaming and Iron Dog Studio brands. The company also aggregates content from a selection of third-party suppliers via its 3rd party interface, 3PI.

Its products are available under licenses from gambling regulators in the UK, Malta, Gibraltar, Isle of Man, and Italy.

Relax’s partnership with 1X2 Network comes amid a period of continued growth for the provider. The company, which celebrates its 10th anniversary this year, said it has successfully executed an ambitious expansion plan over the last two years and has partnered with the iGaming industry’s biggest online casino operators as part of that plan.

Commenting on their link-up with 1X2 Network, Relax CPO Simon Hammon said that their new partner and its Iron Dog Studio brand “boast a collection of games that have made a real impact on the market” and will represent a strong addition to the offering already available on their platform.

Mr. Hammon added that Relax prides itself on delivering “technical excellence with an innovative approach” and that completing this integration with 1X2 Network seamlessly and “in record time” is an indicator that the partnership between the two companies has huge potential.

1X2 Network CCO Kevin Reid said that the scale of this integration would normally mean a complex process but Relax completed it in a quick and flawless manner. Mr. Reid went on that their deal with Relax raises his company’s profile “among top-tier operators” and expands it geographical reach across new markets, which means it has great strategic value for 1X2 Network.

As a Powered By platform-to-platform partner, 1X2 Network will be offered access to Relax’s wide network of operator partners. The content maker will also benefit from complete commercial independence and quick access to any available market.