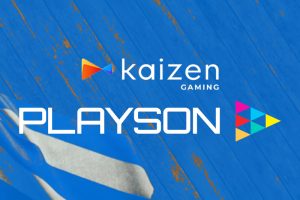 Kaizen Gaming announced that it would expand its casino portfolio by signing with Payson. As part of the deal, the leading Greek game tech company will boost its offering of high-quality immersive iGaming content.

It will get access to Playson’s suite packed with popular titles such as Legend of Cleopatra: Megaways, Zeus: Thunder Reels, and Buffalo Power: Hold and Win.

The partnership will benefit Playson hugely since the slot games developers will see its casino games launch in more than 17 regulated markets starting with Kaizen Gaming’s brand in Greece and continuing with Cyprus, Romania, Germany, Portugal and Brazil.

RNG casino manager at Kaizer Gaming Dimokratis Paradimos expressed his excitement for the partnership for it will make sure to provide unique and safe player experience. Because of that, he is confident that the joint venture will be welcomed by the both brands’ customers.

He added that the two companies aim to fulfill all player needs, while providing them with enjoyable experience.

Christos Zoulianitis, senior account manager at Playson also expressed his excitement for having the opportunity to work with a leading Greek operator.

The deal is part of Playson’s plan to strengthen its positions on the Latin American and European markets, while offering a wide range of high-quality new titles, as well as classic hits.

Playson made steps to growing its presence throughout Europe last year when it signed a deal with Novibet. As part of that agreement, Novibet integrated a host of Playson’s most popular online slots, including player-favorites, such as Pearl Beauty: Hold and Win, Diamond Wins: Hold and Win, as well as the provider’s latest release, Solar King.

Under the agreement, the operator also gained access to Playson’s integration-free suite of engagement solutions, which had already proved to be successful in attracting players and enhancing player retention.

In August 2020, Playson signed another important partnership, this time with Italian gambling operator Snaitech, which is one of the largest gambling companies in the country.

As part of the supply deal, Playson expanded its Italian footprint. Meanwhile Snaitech gained access to the content supplier’s full suite of online slots and made them available to both its desktop and mobile players.