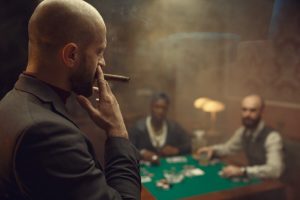 Leaders of cities in Los Angeles County that rely heavily on revenue from their cardrooms have pleaded with the county Board of Supervisors to allow the gaming establishments to remain open with safety precautions.

L.A. County’s seven cardrooms were forced to close on Monday as new health measures aiming to abort a recent surge in new Covid-19 cases in the area took effect. If not permitted to resume operations, the facilities could stay closed for at least three weeks.

However, the city managers and mayors of Hawaiian Gardens, City of Commerce, and Bell Gardens came together on Monday on the empty gaming floor at Commerce Casino to plea for L.A. County supervisors to reverse the ban on outdoor cardroom action.

A similar move worked a couple of months ago when some city leaders tried to reason with county supervisors and succeeded.

In September, some of the same city leaders spoke with the Board of Supervisors asking for permission to reopen their cities’ cardrooms. The establishments had been closed for months at the time. County officials voted to permit the facilities to resume operations outdoors on October 5. However, the cardrooms were not allowed to serve food and beverages and were issued a set of safety protocols to follow.

The cardrooms were ordered to close once again less than two months after their reopening and city leaders expressed concerns that this would be detrimental to their already thinned revenues.

Hawaiian Gardens, which gets more than 70% of its revenue from its Gardens Casino, was forced to lay off 40% of its city staff in the months after the pandemic hit and its cardroom was closed. City Manager Ernie Hernandez said that they will have to cut essential services if “these closures continue”, including “basic government services that people depend on for quality of life.”

Bell Gardens Mayor Alejandra Cortez said that the city has lost nearly half of its revenue since the closure of The Bicycle Casino. The cardroom has long been Bell Gardens’ largest employer. Mayor Cortez also criticized the Board of Supervisors and the Department of Public Health for not including the county’s casinos and cities in the discussions leading up to the new wave of measures and closures.

She said that she too fears her city will have to lay off more staff and reduce city services as a result of the closure of its cardroom.

The Gardens Casino General Counsel Keith Sharp noted that the county’s seven cardrooms collectively spent millions of dollars to set up outdoor tents and equip those with air conditioning and other infrastructure as well as to install plexiglass partitions at the gaming tables. He went on that the county should have by now come up with a “more nuanced way” of dealing with the coronavirus pandemic than countywide closures.