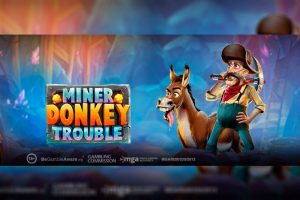 Play’n Go announced this week the launch of its latest feature, the adventure game Miner Donkey Trouble. This is yet another slot from the online casino games maker and supplier, but this time with an adventurous plot.

Company’s CEO Johan Törnqvis stated not so long ago, that the year will be productive for Play’n Go and so far has kept his promise. The games maker and supplier released its first slot right in the beginning of January.

Miner Donkey Trouble is very different from Coils of Cask in terms of theme, appearance and feature design. The storyline is completely different as well.

In Miner Donkey Trouble, as the name indicates, the story represents an underground adventure. It evolves around the Miner and his Donkey, called Trouble. A cave-in separates the two of them and the Miner has to do everything in his power to protect his beloved companion, while collecting hidden gold and gems along the way.

The characters are fully developed and the narrative is strong enough. The two are paired with fun, detailed art style, that captures the game’s feel.

The game has multiple interesting features, that include free spins feature, giving a diversified player experience, as well as a focus on multipliers through the Golden Nugget feature, which carries over into the free spin feature and thus giving more potential for players.

Play’n Go is an award winning games maker and supplier, that was established in 2005. Back then it was one of the first companies that recognized the potential behind mobile gaming. Since then, Play’n Go has made a name of itself as one of the biggest creators of slot games for the online casino industry.

The company made an important move last year by adding Switzerland to the list of territories where its content is available, thus continuing its global expansion strategy.

The Swiss market is the newest to experience Play’n Go popular slots collection. Some of the other markets where the company has introduced its titles include Croatia, Latvia and Lithuania. It entered Swedish and Portuguese markets not long ago.

The company aims to spread its influence beyond European territories in 2021 and in the years ahead.

Following the release of the new title, CPO Martin Zettergren stated that the diversity of titles that the company brings is the key to their success. He added: By catering to a broader range of players with our entertainment, we allow our operators to broaden their audience and get more value, through one supplier.”