The Ohio Senate Select Committee on Gaming met for the third time on Wednesday, taking testimony from stakeholders one would usually associate with the push to legalize sports betting – such as sportsbook operators and responsible gaming advocates. But the committee also heard from another group that wants a piece of the sports betting pie: the state’s grocers. 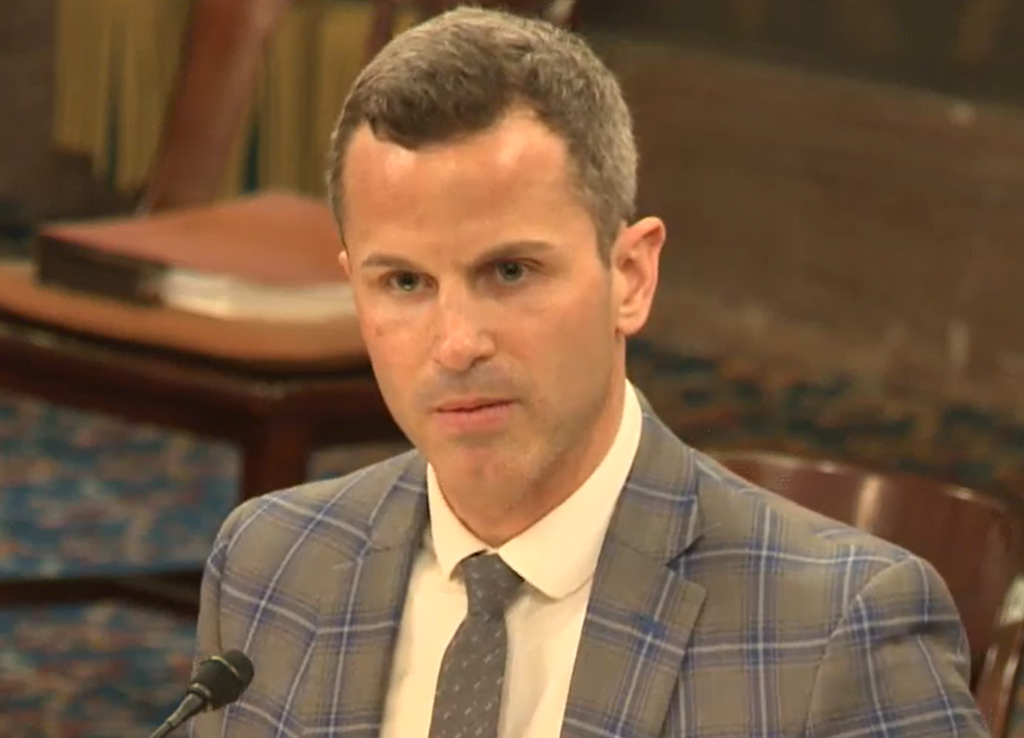 Joe Ewig, a lobbyist for the Ohio Grocers Association, testifies before the Senate Select Committee on Gaming Wednesday. He said the trade group’s members want in on the action if the state legalizes sports betting. (Image: The Ohio Channel)

We recognize that there are a lot of different concepts and proposals on how sports gaming will function and be structured in Ohio,” Ewig said. “To that end, we are not here today to advocate for opening a sportsbook in each grocery store, having tables set up through our locations or isles, but we ask you to consider making us a part of the sports gaming system.”

In short, that means allowing the Ohio Lottery to offer some type of sports betting product. Ideally, Ewig said that would happen through existing lottery terminals already in place in grocery and convenience stores.

He added that the model would work because a variety of customers walk through supermarkets daily. Customers frequent there because they’re “safe and secure” locations.

“Appreciating mobile gaming will no doubt consume the lion’s share of the market, we are asking for an inclusive approach that will allow other businesses in Ohio, including grocery stores, to provide a sports betting product as part of an expanded lottery offering,” Ewig added.

Several sports betting states utilize the lottery in some facet to operate at least some aspect of the operation.

Ewig also told lawmakers that Delaware also allows its lottery retailers the chance to participate in sports betting. The lottery’s website shows that its retailers can offer pro and college football parlay cards.

State Sen. Niraj Antani, R-Miamisburg, questioned though if a sports betting law should restrict retailers like grocery stores regarding the size of bets they can accept.

“Perhaps we don’t want a person coming in with $5 million in cash in a duffel bag and feeding it into the machine, as funny of a picture that that is in our minds,” Antani said.

Ewig said the grocers would be willing to hold a conversation on that topic to determine what makes sense.

A recording of the full hearing is available here.

Last May, lawmakers in the Ohio House of Representatives passed a sports betting bill by a comfortable margin. However, it failed to gain traction in the Senate, where members there proposed their own bill. When that session ended, so too, did the House bill’s chances for passage.

That means lawmakers must start their effort anew. It also must happen with new sponsors. Three of the four primary sponsors of both the House and Senate bills from the last session are no longer in office.

That led the Senate to establish the select committee to look at sports betting. It also is looking at other gaming topics, such as e-bingo.

On Wednesday, members heard from Dan Dodd, a former Ohio lawmaker and now a lobbyist representing the iDevelopment and Economic Association (iDEA Growth). That group seeks to grow online gaming across the country.

Dodd gave members some insights into the prevalence of sports betting in the state. He said on Super Bowl Sunday, more than 354,000 legal sports betting geolocation transactions occurred within 10 miles of Ohio. But, he also encouraged the committee to consider legalizing iGaming as well.

“Regulation of iGaming has been hugely successful on all fronts in these states, and iDEA Growth looks forward to being a resource on this topic as Ohio examines its competitive gaming future,” Dodd said.

As the American Gaming Association noted earlier this month, while sports betting was in about five times the number of states compared to iGaming in 2020, online casino gaming actually produced slightly more revenue last year.