The Tokyo Metropolitan Police Department this week raided what they believe is an illicit underground casino operating out of a luxury high-rise. But the owner of the lavish pad claims he was simply running a business training people how to deal table games. 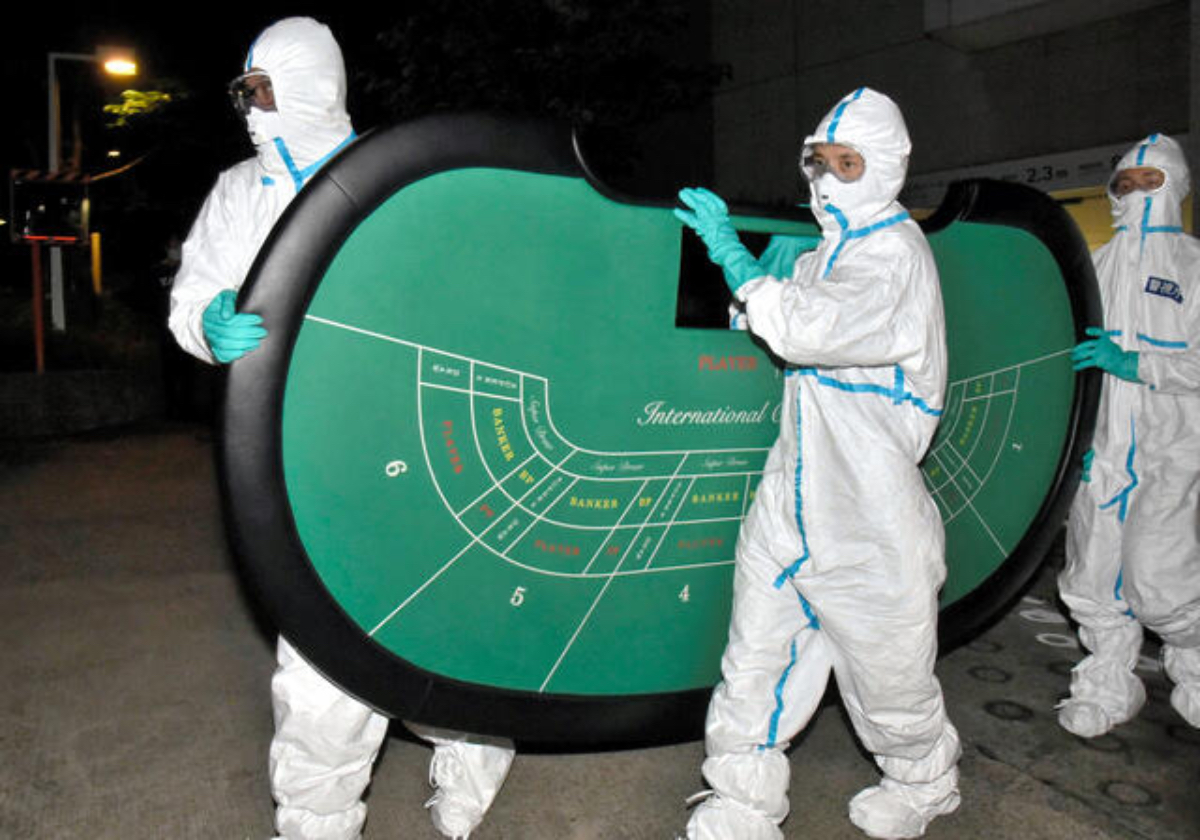 Police officers in Tokyo seize gaming tables allegedly involved in an illegal casino operation. The owner of the property, however, says he was only using the tables to train future casino dealers to work in legal, regulated venues. (Image: Tokyo Metropolitan Police)

The raid occurred in Tokyo’s Roppongi district on June 14. Police arrested six men on suspicion of operating a casino for profit. Two customers were also detained on suspicion of gambling.

Though Japan legalized commercial gambling in 2018, the country’s lawmakers are still finalizing regulations that will govern the forthcoming industry. Cities and prefectures are in the process of forming their integrated resort (IR) pitches with casino consortiums.

Japan has three IR licenses up for grabs. No licensed gambling establishment currently exists in the country.

In the lead-up to the 2021 Summer Olympics in Tokyo, which opens July 23, the capital city is on a crackdown to rid illegal businesses of operation.

One of the men arrested this week during the alleged casino bust was Takashi Yamaguchi, 52. Police say he is the owner of the high-rise apartment and was managing the casino operation.

Yamaguchi says he was only running a casino dealer school in anticipation of the three IRs. Police did not say if any substantial amount of cash was confiscated.

We opened a casino school with no purpose to conduct gambling,” police said Yamaguchi countered during initial questioning.

Officer seized poker and baccarat tables from the residence. Law officials said the investigation would focus on whether the alleged casino has links to criminal gangs.

“We will continue to collect as much information as possible and be on alert,” a senior investigator told The Asahi Shimbun.

Tokyo wants to show its best self during the Olympics, and that doesn’t include unlicensed gambling dens luring in visitors during the 17-day global sporting expo.

This week’s bust of an alleged casino is the third such raid in Tokyo since October. Last fall, Metro Police infiltrated an illicit casino that was churning out revenue of $66,500 a month, law officers said.

Another gambling site was raided after police were tipped off that a former professional mixed martial arts fighter was working as a security guard for the rogue casino. Police arrested Koni Okuno for allegedly accepting 11 million yen (US$100,000) in exchange to serve as the casino’s bodyguard.

Okuno said he was unaware of the activities going on inside the venue. Police said the “members-only” casino generated 480 million yen (US$4.36 million) in revenue.