The Monsters of the Midway might have to come up with a new nickname. On Thursday, the Chicago Bears revealed that they submitted a proposal to buy the Arlington International Racecourse property currently owned by Churchill Downs Inc. 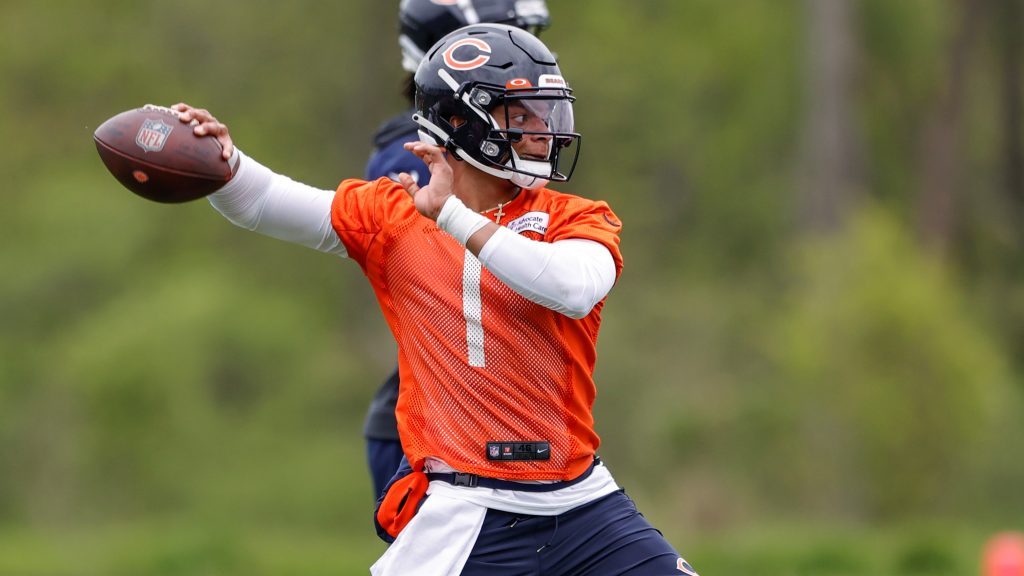 Chicago Bears rookie quarterback Justin Fields works out during an offseason minicamp at Halas Hall last month. The highly touted QB could potentially play in his prime at a new stadium where Arlington International Racecourse now stands. The Bears president and CEO said Thursday the team put in a bid to buy the property in Arlington Heights, Ill. (Image: Kamil Krzaczynski/USA TODAY Sports

The Louisville-based gaming company announced in February its plans to sell the 326-acre development in the tony Chicago suburb, saying that the land had – to the chagrin of thoroughbred horsemen – more suitable purposes. Since then, rumors circulated about the city beloved NFL team’s interest.

We recently submitted a bid to purchase the Arlington International Racecourse property,” team President and CEO Ted Phillips said in a statement. “It is our obligation to explore every possible option to ensure we’re doing what’s best for our organization and its future. If selected, this step allows us to further evaluate the property and its potential.”

The Bears are the second entity to publicly announce their interest in the property. A group led by Roy Arnold, a former Arlington Park track president, issued a statement on Tuesday, the deadline to submit a bid. Arnold’s group seeks to save the historic track for racing and develop other parcels around it.

Should Churchill Downs pick the Bears bid, it would not necessarily end the property’s potential as a gaming site. While football would replace horse racing on the property, the Bears could pursue a sports betting license.

The expanded gaming law Illinois lawmakers passed two years ago not only legalized sports betting, but it also allowed the state’s major league pro teams with venues seating at least 17,000 to pursue a license and host a sportsbook on-site or near their stadium.

The cost for the license is $10 million.

Last year, DraftKings announced a partnership with the Chicago Cubs to establish, eventually, a sportsbook at or near Wrigley Field, the club’s longtime home.

In Washington, DC, William Hill has opened a sportsbook at Capital One Arena, and across town, BetMGM recently went live with its mobile sports betting app in the nation’s capital. BetMGM plans to open a brick-and-mortar book there later this year.

For the past couple years, as Churchill Downs officials and representatives from the Illinois Thoroughbred Horsemen’s Association maintained a frosty relationship that stemmed from CDI’s decision not to pursue a racino license, there were lingering concerns about the track’s future.

Officials in the village of Arlington Heights, which has embraced the track as a town symbol, also grew worried about a possible closure.

However, if horse racing’s no longer in the cards for Arlington, then per a statement from the village’s mayor Thursday, the Bears making it their home seems an intriguing option.

We welcome the Chicago Bears interest in the Arlington Park site,” Mayor Tom Hayes said. “It is a one-of-a-kind location, and we are glad that the Bears ownership sees its tremendous potential.”

Hayes added that village officials will work with Churchill Downs and CBRE, its broker, “to closely review” the bids.

Aside from the Bears and Arnold submissions, Hayed told Casino.org in an email that local officials did not know how many bids the property received. Further, he added, Arlington Heights’ main priority is seeing to it that the Arlington Park land is put “to its highest and best use.”

One public official who was not thrilled to hear about the bid was Chicago Mayor Lori Lightfoot. A self-avowed Bears fan and season ticket holder, she issued a statement reiterating the Bears signed a lease to play at Soldier Field for another 12 years.

She decried the Arlington bid as a “negotiation tactic” as talks have transpired between the two sides about renovations to the current stadium, and that she will do everything she can to keep the team in Windy City and out of the burbs.

“And like most Bears fans, we want the organization to focus on putting a winning team on the field, beating the Packers finally, and being relevant past October,” she quipped. “Everything else is noise.”