One of the oldest casinos on the Strip celebrated the completion of a four-year, $200 million overhaul as officials from Caesars Entertainment unveiled Thursday the redesigned Harrah’s Las Vegas. 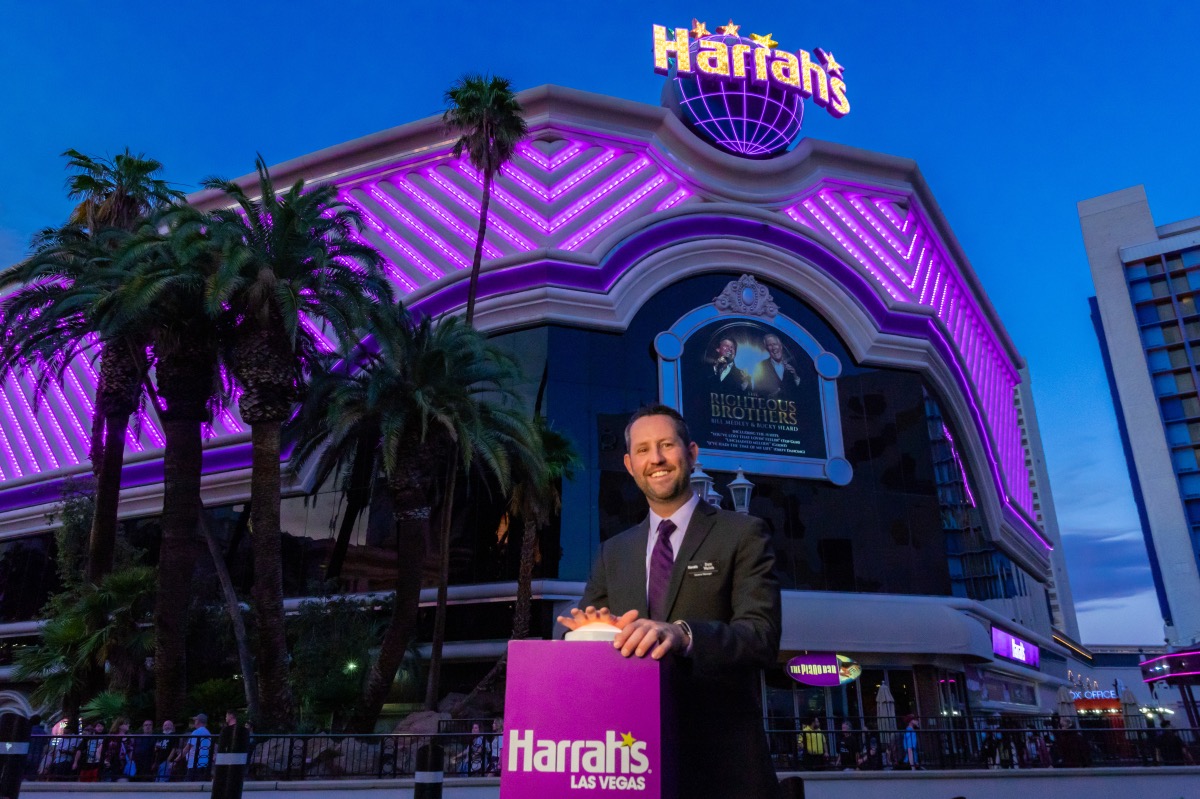 Dan Walsh, senior vice president and general manager of Harrah’s, launched the celebration by hitting a button that turned on the casino’s new exterior purple lighting.

As a flagship location of the iconic gaming and hospitality brand, revamping Harrah’s Las Vegas not only enhances the guest experience but also further reflects the fun and energy that makes Las Vegas such a unique travel destination,” he said in a statement.

After renovating the Valley Tower rooms in phases in 2016 and 2018, Harrah’s completed the redesign of all 2,542 rooms and suites last year. That included the Mountain Tower, which the company spent another $70 million to complete. Design work on the rooms was completed by Marnell Architecture.

The renovations also include Harrah’s suites as well. Those accommodations now feature oversized tubs, a separate living and dining room with a wet bar and the option to connect to two bedrooms.

The history of Harrah’s Las Vegas dates back to 1973, when it opened as the Holiday Casino. Only six existing hotels on the Strip are older. Company executives renamed it after William Harrah, the founder of the Harrah’s Casino chain, in 1992.

Holiday Corp., which owned the casino and the Holiday Inn chain of hotels acquired Harrah’s business in 1980, less than two years after his death.

Besides the recently completed renovation, the property has been overhauled three other times. The most recent occurred in 1997. At that time, officials spent $200 million to abandon the riverboat casino theme that it had since its opening.

Besides the more than 2,500 rooms, the resort features 87,000 square feet of gaming space, a retail sportsbook, a weekend spa, 25,000 square feet of convention space, and a skywalk that connects to the Caesars Forum conference center. Harrah’s also features six restaurants – including a Ruth’s Chris Steak House and PizzaCake by CakeBoss star Buddy Valastro.

Donny Osmond to Headline at Harrah’s

In addition to the renovations, Harrah’s also provided some more information about Donny Osmond’s return to the Strip. Osmond with his sister Marie Osmond were a hit duo in the 1970s, and they parlayed that fame into a long-running residency in Las Vegas. For 11 years, they performed at the Flamingo, another Caesars resort, until Nov. 2019.

According to Harrah’s, Donny Osmond will begin a multi-year residency – his first as a solo act – starting on Aug. 31. The show will run from Tuesday through Saturday will include a mix of his hits and new material.

Tickets for his Opening Night show start at $295. Regular shows start at $65.