Ohio lawmakers unveiled their latest attempt at a sports betting bill on Thursday with hope they can fast track it through the state Legislature. 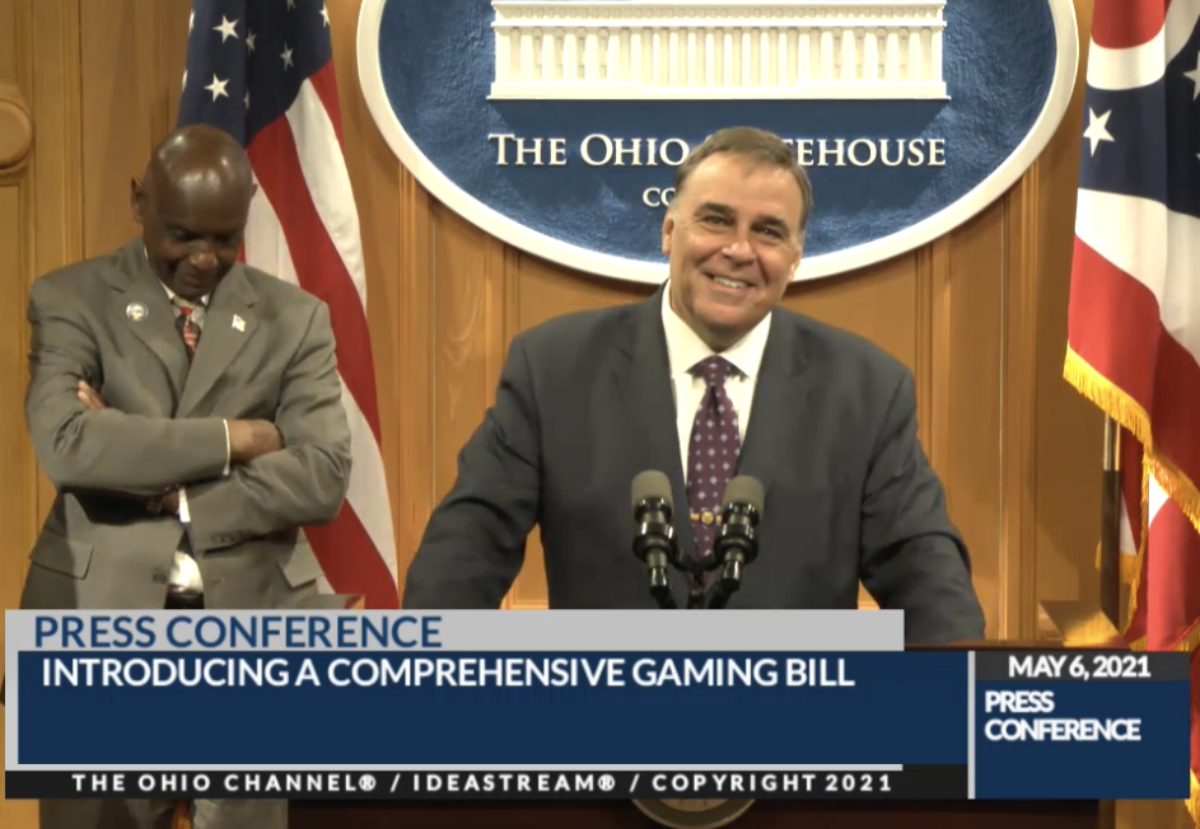 Ohio Senate Majority leader Kirk Schuring holds a press conference Thursday to go over details of a sports betting and expanded gaming bill that the chamber will consider. He and other supporters of the measure hope to pass it by the end of June. (Image: The Ohio Channel)

There remain several key details that lawmakers still need to flesh out. However, a key legislative leader expressed hope it can pass before lawmakers head out for summer break.

“There’ll be other iterations of the bill,” Senate Majority Floor Leader Kirk Schuring, R-Canton, said. “But we do want to get it done before the end of June. We think it’s time that we take action.”

While Schuring is not the lead sponsor of Senate Bill 176, he is the chairman of the Select Committee on Gaming. That panel took testimony from gaming industry representatives and other interested parties over a two-month period through March.

Then over the past month, Schuring met with other members of the committee to hash out details of the proposed legislation. He had a list of more than 200 bullet points put together before he met with Senate President Matt Huffman, R-Lima, to begin putting the framework together.

That committee is scheduled to meet again on Wednesday. That, though, is pending until the bill is officially referred to the committee.

Type A for Casinos, Online Operators

Ohio happens to have 11 casinos and racinos. Also, the state’s eight professional sports teams and the PGA Tour banded together to lobby lawmakers for access to licenses. While those numbers add up to 20, it doesn’t appear – for now, anyway – that lawmakers intend to award licenses exclusively to those businesses.

While noting the Type A licenses would likely be for the state’s casino operators, Schuring added that any other business willing to put up the money to accept bets would be able to apply for a license.

“We believe in the free market,” he said. “So, if there’s another entity out there right now, notwithstanding those 11 (casinos) that we’re talking about, who can come up with the money to bank the bet, come to Ohio.”

He said a number of casino companies have made skin arrangements with multiple online sports betting operators in anticipation that casino licensees would serve as the primary license holder.

So I think there’s definitely more than 20 companies that are interested, and if we’re going to have a free market, I think we should make sure that those who are wanting to get into the market have the opportunity to do so,” said Dodd, the vice president of government affairs for ZHF Consulting.

As Schuring noted, he expects changes to the legislation. So, it remains a possibility the number of licenses will change.

Type B for Retail Operators

Interestingly, the current language for the Type B licenses would seem to deter casinos from pursuing them.

According to a bill analysis from the Ohio Legislative Budget Office’s Office of Research and Drafting, brick-and-mortar sportsbooks would not be allowed at casinos or racinos. Casinos could still get a license, but they would have to build a separate facility.

The more likely target for the Type B licenses would be the state’s major professional sports teams, Schuring said. He also thinks the retail establishments will be job creators.

Both types of licenses would cost $1 million for three years. No one entity may hold more than five Type A or five Type B licenses.

The state would tax license holders of both types at 10 percent of their net revenue.

Ohio Lottery Gets in the Game

That’s not all, though, for Ohio sports betting. The bill also includes a pari-mutuel product that the state lottery would offer. It appears to be in response to representatives from the state’s bowling alley and grocery trade associations. Both of those groups said their members wanted to offer a sports betting product as well.

For $20, bettors could pick an outcome of an event or series of events. The state’s lottery commission would take a percentage of each ticket. The winning ticket holders would split the remainder equally.

This isn’t Ohio Legislature’s first time discussing sports betting. Last year, a bill cleared the state House by a strong margin. However, it never gained traction in the Senate, where there was a competing bill with different language. One of the key hangups was the House wanted the Ohio Lottery Commission to manage sports betting. Senators meanwhile wanted the Casino Control Commission to oversee it.

When the session ended in December, it meant lawmakers needed to start anew. That’s how the Senate Select Committee on Gaming came to fruition. The committee is also tasked with legalizing e-Bingo and considering iLottery, but most of the attention paid to the committee has been on its sports betting work.

It also seems that there is now some common ground between the chambers when it comes to sports betting.

House Speaker Bob Cupp (R-Lima) told The Statehouse News Bureau that his chamber is also working on a bill. But there’s one key difference in what will likely come from the House this year.

“I think the general consensus is forming that the Casino Control Commission might be the appropriate body but that wouldn’t prevent them from possibly contracting with the Lottery Commission to do some things,” Cupp said.

How Can Ohio Pass Sports Betting by June

Dodd, who served two terms as a state representative, shed some light on how lawmakers may be able to get a bill through the legislature quickly.

He said that the Senate would likely hold hearings on the bill. But rather than take it to the floor, senators may take a House bill that’s already in the Senate and add the bill as an amendment.

Once it passes the Senate, it would go back to the House for a vote to concur on the amendment – in this case, the sports betting bill language. If the House concurs, the bill goes to Gov. Mike DeWine for his signature.

If the House doesn’t concur, then both chambers would need to hammer out their differences in a conference committee.

“I would anticipate that the House and Senate will negotiate the amendments before they’re put into the house bill to avoid a conference committee,” Dodd said.