The Nevada Gaming Control Board this week recommended that Resorts World Las Vegas be approved for licensing. 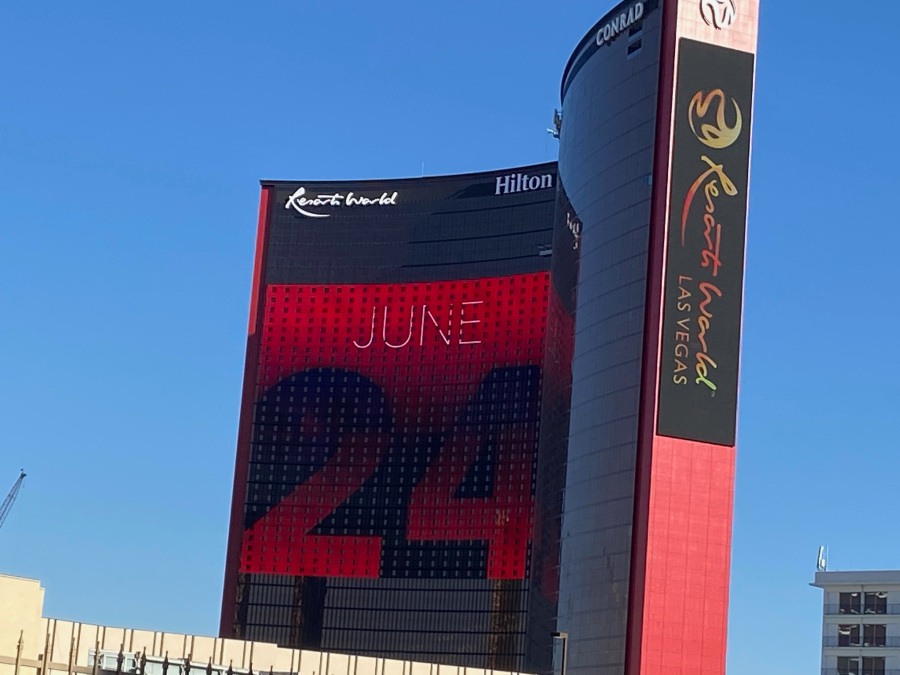 Resorts World Las Vegas towers over the northwest end of the Las Vegas Strip. The date the resort is set to open, June 24, is displayed on an exterior wall. (Image: KLAS-TV)

The board on Wednesday unanimously recommended licensing for the $4.3 billion hotel-casino under construction on the Las Vegas Strip. The final licensing approval goes to the Nevada Gaming Commission on May 20 for final consideration.

Board member Phil Katsaros said he was impressed by a Resorts World television ad that aired during the Oscars broadcast on ABC in April. Katsaros recently toured the resort, according to the Las Vegas Review-Journal.

“My socks were knocked off,” Katsaros said. “And the advertisement you produced, the marketing department knocked it out of the park.”

The 30-second “Stay Fabulous” ad features performers Celine Dion, Carrie Underwood, Katy Perry, Luke Bryan, Tiësto, and Zedd. These performers are slated to appear at the resort after its scheduled opening on June 24.

Alana Litavis, Resorts World’s marketing vice president, said the ad was intended to “Vegas-ize the brand and make it stand out,” according to Adweek.

“We wanted integrate the celebrities into the story of the property,” Litavis said.

Board member Brittnie Watkins said she was impressed with the ad, according to the Review-Journal. The meeting on Wednesday was her first as a board member.

I think you guys have some great things going on,” she said.

The ad prompted an array of comments on the KLAS-TV YouTube channel.

One viewer identified as “Welcome to the Mlife” wrote, “I’m excited for Resorts World, but what a bizarre commercial.”

Another viewer identified as “Lisa Bailey” wrote, “Look out World!! Katy Perry is coming to Vegas!! Time to wake up in Vegas and see some actions!! I will definitely be there!!”

The 3,506-room hotel-casino is located at the northwest end of the Strip where the Stardust Casino once stood, near Circus Circus.

Resorts World will be a limited-smoking property, with smoking banned everywhere except the gaming floor, according to Resorts World President Scott Sibella.

The hotel portion of Resorts World will have three Hilton-branded options. Each will have separate entrances and lobbies. Hotel guests can participate in the Hilton Honors rewards program.

Gaming, shopping, and dining loyalty points can be earned through Genting Rewards. This loyalty program is available from the property’s owner, the Malaysia-based Genting Group.

Resorts World also will have the largest pool deck in Las Vegas and the only infinity pool on the Strip.

The property also will be in partnership with Gemini, a cryptocurrency exchange. This will allow guests to use a Gemini crypto wallet at the resort, the newspaper reported.

Resorts World is the first hotel-casino to open on the Strip since the Cosmopolitan of Las Vegas began operations in December 2010. The Cosmopolitan is on the west side of the strip near the Bellagio.

Resorts World is part of a revival on the Strip and nearby tourist areas. Included in this revival is the planned construction of a sports arena and non-gaming hotel and entertainment complex on 27 vacant acres at the northeast end of the Strip near the Sahara Las Vegas.

In addition, a retail and restaurant complex is proposed on the west side of the Strip at CityCenter near where the Tower of Pizza once stood.