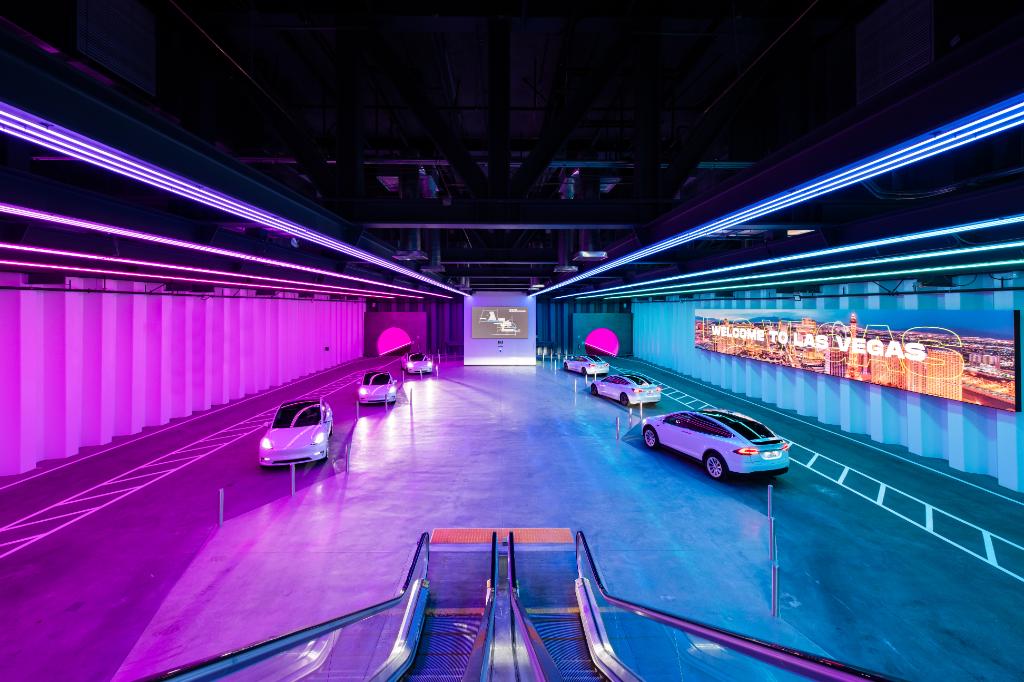 Cars are lined up at a station in the Las Vegas Convention Center Loop. The $52.5 million project is expected to open to the public in June. (Image: LVCVA)

Media outlets got the chance to take a ride in a Tesla, another Musk company, around the two one-way .8-mile tunnels. Your intrepid Casino.org reporter, unfortunately, was not among them as he is based in Louisville. But I’m hoping to ride it the next time I go to Sin City.

The Tesla vehicles, some of which can hold up to 16 people, can travel as fast as 150 miles per hour. However, due to the short length of the course, the rides are capped at 35 miles per hour. Still, LVCVA officials noted that the Loop will cut down on the amount of time it takes people to traverse the 2 million square foot convention center spread across 200 acres.

It’s over a mile to walk from one end to the other, and anytime you’ve seen that with a big crowded show, it can be more than a half an hour from one side of that show to the other,” said Steve Hill, LVCVA president and CEO. “So we needed a way to move people back and forth that was easy, that was fun and was a way for them to experience everything that show has to offer.”

The tunnel project was the first for The Boring Company. Musk has proposed the tunnel system as a cost-efficient way to resolve traffic issues.

“We’re grateful to LVCVA and all local stakeholders for providing us the opportunity to construct our first commercial project in one of the world’s most dynamic destinations,” said The Boring Company President Steve Davis.

While the plan is for the cars to be driven autonomously at some point, live drivers were behind the wheels. Live drivers will also be in place when the system is expected to officially open during the World of Concrete, the first major trade show the center will host since the COVID-19 pandemic started last year.

Convention officials say the system will be able to accommodate as many as 4,400 people per hour. However, a report from TechCrunch.com last year indicated that fire safety standards may cut that capacity significantly.

If that’s the case, it could cost the company millions if it’s unable to meet the convention center’s needs.

Hill, though, on Friday was talking more about the impression the Loop may likely leave on riders.

“It’s fun,” he said. “People love Tesla. People love the idea of an entertainment experience, frankly, in moving back and forth across this campus. You can see how spectacular this underground station is. It’s, a quick experience, but it’s also an artistic and fun one as well.”

Las Vegas officials though seem to have embraced the Musk loop concept. So much so, plans are still in the works to connect downtown Vegas, the Strip, Allegiant Stadium, and eventually McCarran International Airport.

Hill said that the Loop can transform how people move about in the city as they’ll have more time to spend at resorts and other attractions.

“Many of our visitors land here at the airport,” he said. “They have to then leave the airport and go to the hotel. That can take some time. It can be a 20-, 30-, 40-minute experience. The Boring Company system, for example, can get you from the airport to downtown in about 10 minutes. It’ll be less expensive than a number of different options and certainly much quicker.”