After a federal appeals court panel ruled Monday against the Seneca Nation of Indians in its ongoing legal battle with New York, Gov. Andrew Cuomo had a simple statement for the tribe – it’s time to pay up. 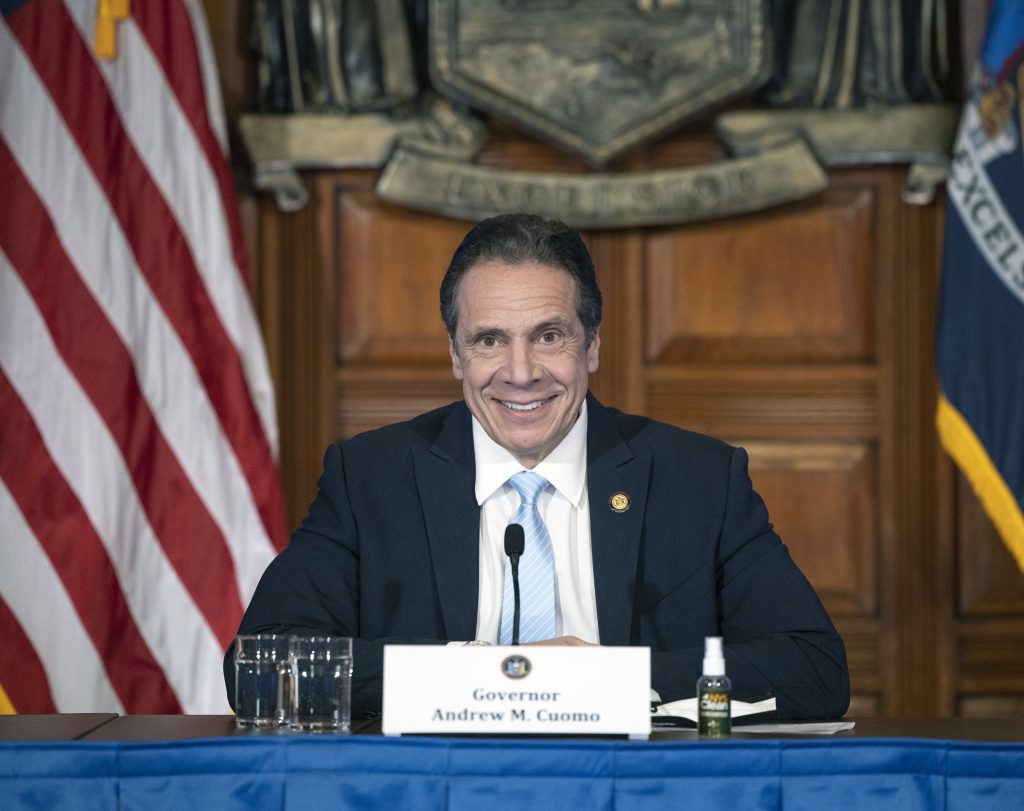 New York Gov. Andrew Cuomo at his Feb. 8 COVID-19 briefing in Albany. On Monday, Cuomo announced a federal appeals court ruled in the state’s favor in a case filed by the Seneca Nation of Indians regarding payments tied to the Class III gaming compact between the two sides. (Image: Mike Groll/Office of Governor Andrew M. Cuomo)

With the state’s latest legal victory in the now four-year-old case over tribal gaming revenues, Cuomo told reporters the tribal nation owes the state and about a dozen county and local governments in the western part of the state about $435 million.

The court decision was clear and after years of delay, multiple appeals and multiple court losses, it is high time the Seneca Nation follows the law and pays what they owe,” Cuomo told reporters in announcing the verdict during his daily briefing.

State Budget Director Robert Mujica said of the funding, about $150 million will go to a dozen local governments, including Buffalo and Niagara Falls. The remainder will go to the state, which he said would use most of those funds for education.

The Seneca Nation operates three casinos in the state. In 2002, it signed a gaming compact with state officials, enabling the tribe to offer Class III gaming. The agreement was for 14 years with a seven-year optional extension that kicked in if neither party objected.

Both sides agreed to continue the arrangement, but after that Seneca leaders raised questions about the need to continue making payments to the state and local governments. It cited an Interior Department letter stating the payments did not have to continue.

The department eventually withdrew the letter.

Both New York and Seneca Nation entered into arbitration. After a split decision in the state’s favor in 2019, tribal leaders went to federal court to vacate that decision. In filing suit, Seneca officials said the arbiters did not follow the Indian Gaming Regulatory Act (IGRA) in its ruling. Tribal leaders also said the panel’s ruling undermined the authority of the Interior Department, which oversees tribal matters.

In November 2019, a US District Court judge ruled in the state’s favor. That led Seneca officials to take the matter to the Second Circuit Court of Appeals before a three-judge panel.

In the ruling, Judge Rosemary Pooler noted that the arbitrators did not break the IGRA. In addition, after the Interior Department withdrew its technical letter, the agency decided not to intervene.

“There is no suggestion the arbitrator lacked the power to order payments; indeed, this was the very question submitted to it,” Pooler wrote. “Upholding the decision here does not undermine IGRA’s secretarial review requirement. Instead, it merely reinforces the principle that where a party chooses to leave contract interpretation to arbitrators, a party cannot invoke that requirement to evade the consequences of its choice.”

While Cuomo wants the Seneca Nation to pay the state – especially as the state faces a budget shortfall of up to $15 billion – Monday’s ruling may not necessarily be the last in the case.

Under the appeals process, the tribal nation could ask the full Second Circuit to review. It also could take the matter straight to the Supreme Court.

“The Seneca Nation is reviewing today’s decision and discussing all of our options at this time,” the tribal nation said through a spokesperson in a statement Monday.